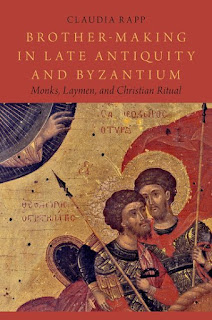 
Among medieval Christian societies, Byzantium is unique in preserving an ecclesiastical ritual of adelphopoiesis, which pronounces two men, not related by birth, as brothers for life. It has its origin as a spiritual blessing in the monastic world of late antiquity, and it becomes a popular social networking strategy among lay people from the ninth century onwards, even finding application in recent times. Located at the intersection of religion and society, brother-making exemplifies how social practice can become ritualized and subsequently subjected to attempts of ecclesiastical and legal control.Controversially, adelphopoiesis was at the center of a modern debate about the existence of same-sex unions in medieval Europe.


This book, the first ever comprehensive history of this unique feature of Byzantine life, argues persuasively that the ecclesiastical ritual to bless a relationship between two men bears no resemblance to marriage. Wide-ranging in its use of sources, from a complete census of the manuscripts containing the ritual of adelphopoiesis to the literature and archaeology of early monasticism, and from the works of hagiographers, historiographers, and legal experts in Byzantium to comparative material in the Latin West and the Slavic world, Brother-Making in Late Antiquity and Byzantium examines the fascinating religious and social features of the ritual, shedding light on little known aspects of Byzantine society.