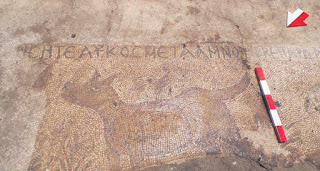 A new mosaic inscribed with quotes from the Bible has been discovered in the southern city of Adana during excavations jointly undertaken by the Culture and Tourism Ministry's Cultural Heritage Department and the Provincial Directorate of Museums. The 120-square-meter mosaic was found on private property located in the Karlık neighborhood of Adana's Sarıçam district. According to archaeologists, the Eastern Roman-era mosaic dates back to between the fifth and sixth centuries A.D.It features 16 different animal figures, including a snake, lion, sheep, leopard, wolf, goat and bull. Wild and domestic animals are portrayed as sleeping and being fed together or eating each other's food. A related ancient Greek text describing how wild and domestic animals lived together and shared the same pasture was translated by a group of researchers commissioned by the museum directorate. The translated text quotes the Biblical chapter of Isaiah (65:25), including: "The wolf and
Post a Comment
Read more
More posts