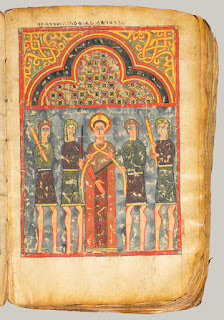 A great resource, the online interface of the Metropolitan Museum of Art, New York, has published several images and historical introductions of Byzantine objects. Here is an example of a page from an Illuminated Gospel, late 14th centuryEthiopia, Highland region: This illuminated manuscript of the Four Gospels was created at a monastic center in northern Ethiopia. Twenty full-page paintings depict scenes from the life of Christ and four portraits of the evangelists introduce the respective Gospel texts. The New Testament was translated from Greek into Geez, the classical language of Ethiopia, in the sixth century. Both this text and its pictorial format draw upon Byzantine prototypes, which were transformed into a local idiom of expression. Stylistically consistent, the paintings reflect the hands of two distinct artists. The color scheme consists of red, yellow, green, and blue. A stylized uniformity is reflected in the abbreviated definition of facial features and the bold lin
Post a Comment
Read more 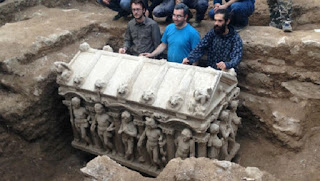 From: http://archaeologynewsnetwork.blogspot.co.uk A late-Roman era sarcophagus thought to be belonging to the Late Roman Empire was unearthed and transferred to a museum in Iznik, Bursa. The sarcophagus weighing nearly 7 tons.
Post a Comment
Read more
More posts