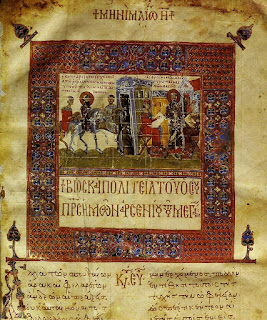 Dumbarton Oaks has made available I .Shahid's  book on Rome and the Arabs. Click here to download The Arabs played an important role in Roman-controlled Oriens in the four centuries or so that elapsed from the Settlement of Pompey in 64 B.C. to the reign of Diocletian, A.D. 284–305. In Rome and the Arabs Irfan Shahîd explores this extensive but poorly known role and traces the phases of the Arab-Roman relationship, especially in the climactic third century, which witnessed the rise of many powerful Roman Arabs such as the Empresses of the Severan Dynasty, Emperor Philip, and the two rulers of Palmyra, Odenathus and Zenobia. Philip the Arab, the author argues, was the first Christian Roman emperor and Abgar the Great (ca. 200 A.D.) was the first Near Eastern ruler to adopt Christianity. In addition to political and military matters, the author also discusses Arab cultural contributions, pointing out the role of the Hellenized and Romanized Arabs in the urbanization of the regio
Post a Comment
Read more

Editors: T. Shawcross & I. Toth From Cambridge University Press: Offering a comprehensive introduction to the history of books, readers and reading in the Byzantine Empire and its sphere of influence, this volume addresses a paradox. Advanced literacy was rare among imperial citizens, being restricted by gender and class. Yet the state's economic, religious and political institutions insisted on the fundamental importance of the written record. Starting from the materiality of codices, documents and inscriptions, the volume's contributors draw attention to the evidence for a range of interactions with texts. They examine the role of authors, compilers and scribes. They look at practices such the close perusal of texts in order to produce excerpts, notes, commentaries and editions. But they also analyse the social implications of the constant intersection of writing with both image and speech. Showcasing current methodological approaches, this collection of essays ai
Post a Comment
Read more
More posts