Hagia Sophia and the Byzantine Aesthetic 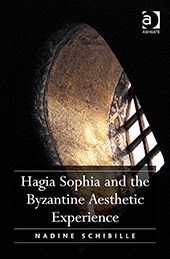 A new book on Hagia Sophia and the Byzantine Aesthetic Experience by Nadine Schibille. From the introduction: Paramount in the shaping of early Byzantine identity was the construction of the church of Hagia Sophia in Constantinople (532-537 CE). This book examines the edifice from the perspective of aesthetics to define the concept of beauty and the meaning of art in early Byzantium. Byzantine aesthetic thought is re-evaluated against late antique Neoplatonism and the writings of Pseudo-Dionysius that offer fundamental paradigms for the late antique attitude towards art and beauty. Click here to browse the book.
Post a Comment
Read more

Medieval Greek romances were a very popular genre in Byzantium. P. Roilos' groundbreaking volume on the topic is now available online. Here is a passage from the conclusions: Through their multilayered responses to the past and their present, the Komnenian novels mediate first between antiquity and the Middle Ages and, second, between the Middle Ages and modernity. Due to its inherent discursive plasticity, the genre of the novel offered the Komnenian writers a dynamic literary medium for the exploration of a number of ideological and conceptual tensions ensuing from originally antithetical but often ultimately complementary conceptual and cultural categories. No doubt these tensions marked Byzantine culture from its initial formation to its final exhaustion. However, all these opposing forces reached their acme in the twelfth century: Hellenism and Christianity, antiquity and “modernity,” tradition and experimentation, secular and sacred, “high” and “low,” pleasure and asce
Post a Comment
Read more
More posts