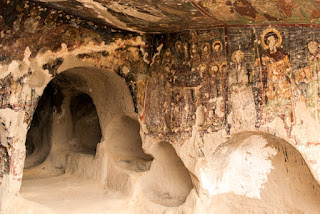 Last February, archaeologists unearthed a unique rock-carved underground church in Nevsehir, in the central Turkish region of Cappadocia. The church was decorated with never before seen frescoes depicting Jesus’ Ascension, the Final Judgement, Jesus feeding the multitudes, and portraits of saints and prophets.The discovery, made during excavations and cleaning operations in an underground city recently uncovered as part of an urban project in Nevsehir, is located within a castle that might date back to the fifth century. Authorities expect it will make Cappadocia an even more important pilgrimage center for Orthodox Christians. Semih İstanbulluoğlu, the archaeologist who heads the works for both the underground city and the church, explained that the walls of the church collapsed because of snow and rain, but that they will be fixed as part of the restoration project. Frescoed sections will have to be collected one by one and pieced together. See more DON'T FORGET T
Post a Comment
Read more
More posts