Icons and Iconoclasm in Byzantium, A MetMuseum essay

November 24, 2012
Form and Function of Icons  Icons ranged in size from the miniature to the monumental. Some were suspended around the neck as pendants, others (called "triptychs") had panels on each side that could be opened and closed, thereby activating the icon. Icons could be mounted on a pole or frame and carried into battle, as has been suggested for the Saint Demetrios icon (1970.324.3). Alternatively, icons could be of a more permanent character, such as fresco and mosaic images decorating church interiors. In Byzantine theology, the contemplation of icons allowed the viewer direct communication with the sacred figure(s) represented, and through icons an individual's prayers were addressed directly to the petitioned saint or holy figure. Miraculous healings and good fortune were among the requests. --> Acheiropoieta , or Icons "Not Made by (Human) Hands" Icons created by divine agency were known as acheiropoieta ("not made by (human) hands"). This categ
Post a Comment
Read more 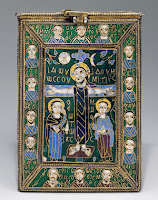 From MetMuseum Relics of the True Cross on which Christ was crucified were quickly and widely distributed after its legendary discovery in the fourth century by Saint Helena, mother of Constantine, the first Christian Roman emperor. Throughout the medieval period, such relics were housed in precious containers and venerated by the faithful. This finely made small box decorated with cloisonné enamel and niello is one of the earliest examples of such a reliquary.
Post a Comment
Read more

November 23, 2012
A study by Ljudmila Pekarska (British Museum): Kiev, one of the most ancient cities of Europe, was for three centuries the capital of the powerful East Slavonic state of Kievan Rus’ (10th–13th centuries). Prince Vladimir the Great, ruler of Kievan Rus’ (r. 980–1015) introduced Christianity to Rus’ from Byzantium, making it the new state religion in 988. The event marked the beginning of a new era in art for Rus’ in general and for Kiev in particular, which accessed and absorbed the rich culture of the Byzantine Empire. Strategically located on the steep banks of the river Dnieper, Kiev became the focal point of contact between Rus’ and the Byzantine Empire. Kievan Rus’ was very active in adopting everything it needed to become a prosperous state. It developed quickly following the construction of the first Rus’ Christian stone church – richly decorated with marble, mosaics and frescos – built by Byzantine architects and builders in the 10th century in a courtyard in t
Post a Comment
Read more

Author of the day: Theodore Stoudites

November 22, 2012
Theodore Studites,  (born 759, Constantinople [now Istanbul, Tur.]—died Nov. 11, 826, Prinkipo, island in the Sea of Marmara; feast day November 11), abbot and leading opponent of iconoclasm, the doctrine opposing the veneration of religious images, which severely disturbed relations between the Byzantine and Roman churches. Under the influence of his uncle, Abbot Plato of Symbola, later a saint, Theodore became a monk and, later, abbot of a monastery near Mount Olympus in Bithynia (northwestern Turkey). For opposing as adulterous the second marriage of the Byzantine emperor Constantine VI to his mistress Theodote in 795, Theodore was exiled to Thessalonica, Greece. After Constantine’s overthrow in 797, Theodore was recalled by the empress Irene. Thereafter, his religious community moved to the monastery of Studios in Constantinople. In 806 he clashed with the emperor Nicephorus I (who asserted authority over the Eastern church) about the appointment of Patriarch Nicephorus of Consta
Post a Comment
Read more

UNESCO's Memory of the World: The Documents that Define Human History

What are the key documents that define our collective human experience? UNESCO's "Memory of the World" serves to protect our heritage in the form of documents, manuscripts, oral traditions, audio-visual materials, library, and archival holdings of universal value. They capture defining moments in human history, from all around the world. This video features: Bayeux Tapestry, writing system of Mexico's indigenous peoples before the Spanish Conquest; rare manuscripts written in Old Church Slavonic; art of the Naxi people; audio collections of composer Johannes Brahms; poetry scribblings by modernist Christopher Okigbo; archives relating to the Suez Canal & life of Ruth Nita Barrow; video footage on the May 18 1980 South Korean Democratic Uprising; Rivonia Trial legal documents leading to Nelson Mandela's imprisonment, and of course, the Diary of Anne Frank.
Post a Comment
Read more

Byzantine Jewellery? Amethyst Beads in East and West during the Early Byzantine Period

November 22, 2012
Precious stones are an integral part of Byzantine jewellery throughout the life of Byzantine culture. This contribution focuses on the time-span between the 5th and the 7th centuries; thus a snapshot from the early Byzantine period. It saw a widespread use of gemstones not only within the Byzantine Empire, but also beyond its borders, for example in the Germanic kingdoms of the West where amethyst and amethyst beads were highly appreciated. These are often found on necklaces from women’s graves, particularly in the regions inhabited by Franks, Alamanni and Bavarians, but they are also known from Anglo-Saxon England, Langobardic Italy and, of course, from Byzantine jewellery found throughout the Mediterranean. This paper presents some considerations on the appearance of amethyst within Byzantine jewellery, about the possible deposits that were exploited for the raw, mineral material, and about the connections between East and West that are clearly visible in the ar
Post a Comment
Read more

November 22, 2012
A comprehensive 12-year investigation headed by Tübingen historian, Professor Mischa Meier into the Chronographia of the Byzantine historiographer Ioannes Malalas (a Greek chronicler from Antioch born around 490 AD) will begin in 2013. “This project marks the end of a long period of rejection of Byzantine historical writings,” says Mischa Meier, “The texts were considered mediocre literature, written by unscholarly monks who simply parroted older sources – making ridiculous mistakes along the way. But now we recognize how very important this text is. The aim now is not just to make Ioannes Malalas accessible as the “father” of all Byzantine chroniclers – it is also to make new discoveries about the treatment of the past in the critical period between Late Antiquity and Early Middle Ages, using a key example.” Read more here . (via @Archaeologybbe )
Post a Comment
Read more

Byzantium and the West: Jewelry in the First Millennium

November 22, 2012
Les Enluminures opens its Fall show in November with an exhibition and catalogue entitled "Byzantium and the West: Jewelry in the First Millennium." The exhibition assembles approximately 40 objects made of precious metals and including rings, pendants, earrings, and brooches from the third to the tenth centuries and explores the interrelationships between East and West during the first millennium. Click here for more info
Post a Comment
Read more

November 22, 2012
Charles Diehl,  Byzantine Civilization   This study, which appeared as Chapter 24 in Volume 4 of the Cambridge Medieval History (Cambridge, 1923), was written by the noted Byzantinist Charles Diehl and covers the period from the 4th through the 15th centuries. Topics in Chapter 24 ["Byzantine Civilisation"] include: Splendour of Constantinople; Twofold aspect of Byzantine civilisation; Constantinople's extent and walls; Its plan in the tenth century; The population of Constantinople; Religion; St Sophia; The power of Monasticism; The Sacred Palace; Imperial ceremonial; Court life: intrigues; Part played by women; Luxury of society; The Hippodrome and the factions; The populace; Bazaars and gilds; Commerce; Culture; The University of Constantinople; History; Theology; Poetry; Art; The provinces; The towns; The countryside; Power of the great nobles; The Byzantine character; Oriental, Greek, and Christian influences; Virtues and defects of the Byzantines; The inheritanc
Post a Comment
Read more

A History of the Byzantine Empire (video)

Video of an older presentation (Yet, much has changed since then in our view of the Byzantines)
Post a Comment
Read more 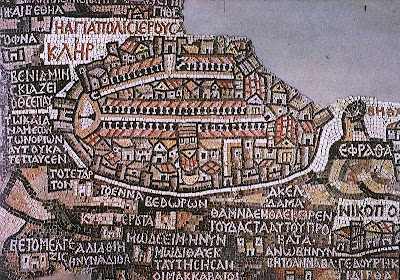 The Madaba Map (also known as the Madaba Mosaic Map) is part of a floor mosaic in the early Byzantine church of Saint George at Madaba, Jordan. The Madaba Map is a map of the Middle East. Part of it contains the oldest surviving original cartographic depiction of the Holy Land and especially Jerusalem. It dates to the 6th century AD (source wikipedia).
Post a Comment
Read more
More posts