The goal of the digital iteration of Loeb, say several academics involved with the project, is to allow students, scholars, and others to draw out themes from ancient literature even if they don’t know where to look and don’t speak the languages. A religion scholar who wants to learn more about Greek and Roman conceptions of the soul would be able to search the entire body of ancient literature for soul references, says Thomas. The scholar could also refine a search for references to the soul by specific authors or time periods, he says. Being able to search within the confines of the ancient canon will give users more breadth than searching digitized versions of individual texts while allowing them to avoid the detritus that tends to accumulate in searches of less well-defined vaults, says Thomas. A general Web search of “Homer” and “soul” might turn up some relevant material, he says, but “I would probably get Homer Simpson and soul music.” Google Book Search, meanwhile, turns up a
Post a Comment
Read more

How to Draw Byzantine Icons 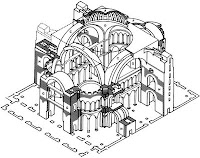 Focus and Scope PAREKBOLAI is an electronic journal, which is published yearly by an Editorial Committee of Byzantinists of the Aristotle University of Thessaloniki and the National and Kapodistrian University of Athens. The name is inseparably linked with the well-known Commentaries of Eustathius of Thessalonica, and was chosen as a sign of both the journal’s association with the University of Thessaloniki as host institution and its subject matter. The journal publishes original articles on Byzantine Literature and Philology as well as related text-based studies covering the period from the 4 th to the 15 th centuries in English, French, German, Greek, and Italian. All articles submitted will be peer-reviewed by two members of the journal’s International Editorial Advisory Board, and once approved will be uploaded immediately as pdf files, which will be created by the Editors in consultation with the authors. Click here for more information.
Post a Comment
Read more