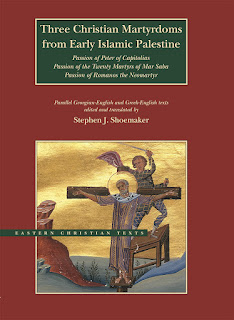 From the editors: A distinctive feature of Christian culture in early Islamic Syria and Palestine was a renewed interest in literature on martyrs, which represented a potential reaction among some Christian communities to the rise of Islam in the region. The adaption of this early Christian genre to the new circumstances of political domination during the early Middle Ages offers a revealing, yet until now largely unexplored, window onto how Christians responded culturally to Islamic imperialism. This bilingual edition of three martyrdoms provides a new opportunity to understand this historical phenomenon. These writings, composed at the Mar Saba monastery in the Judean Desert and attributed to famous members of that community, share a common high literary style, although each portrays Christian martyrdom at the hands of the Muslims very differently. This parallel-text edition offers the only English translations available of these important works, making it an invaluable resou
Post a Comment
Read more

Byzantium and the Emergence of Muslim-Turkish Anatolia, ca. 1040-1130 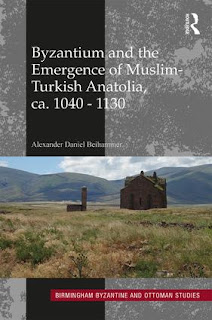 Author: A. Beihammer The arrival of the Seljuk Turks in Anatolia forms an indispensable part of modern Turkish discourse on national identity, but Western scholars, by contrast, have rarely included the Anatolian Turks in their discussions about the formation of European nations or the transformation of the Near East. The Turkish penetration of Byzantine Asia Minor is primarily conceived of as a conflict between empires, sedentary and nomadic groups, or religious and ethnic entities. This book proposes a new narrative, which begins with the waning influence of Constantinople and Cairo over large parts of Anatolia and the Byzantine-Muslim borderlands, as well as the failure of the nascent Seljuk sultanate to supplant them as a leading supra-regional force. In both Byzantine Anatolia and regions of the Muslim heartlands, local elites and regional powers came to the fore as holders of political authority and rivals in incessant power struggles. Turkish warrior groups q
Post a Comment
Read more
More posts