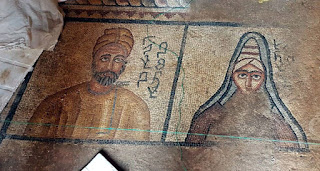 New Syriac inscriptions have been discovered Archaeologists have discovered five base mosaics from Abgar V (BC 4 – AD 7), the fifth king of the kingdom of Osroene (132 BC to AD 244), depicting fine engravings and Syriac inscriptions, as part of a project titled "The Castle Skirts". The mosaics will be displayed in museums after their restoration is completed Read More
Post a Comment
Read more
More posts