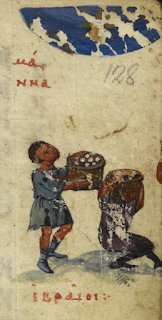 A recipe of delicious Byzantine vegan food from a manuscript at the British Library: One of our Byzantine Greek service books, a collection of lessons for the Saturdays and Sundays of Lent, contains a very special recipe: not only is it completely vegan, it is said to have been received directly from Heaven. The short note is preserved in a lection for the first Saturday of the Great Lent which records the miraculous revelation of the new recipe as follows.  “Koliva is wheat kernels boiled soft and sweetened with honey, sesame seeds, almonds, ground walnuts, cinnamon, pomegranate seeds, raisins and anise.' When the archbishop inquired who is the provider of the new recipe , his visitor simply answered, 'I am Theodore the Martyr of Christ whom he has now sent to you to reveal this and provide new food for his people.' Read here the whole story
1 comment
Read more
More posts