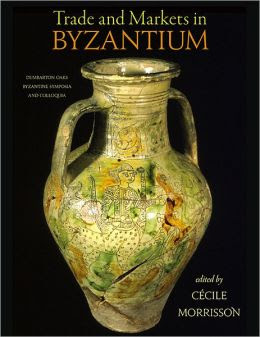 This collection, edited by Cécile Morrisson, is the fourth volume of the Dumbarton Oaks Byzantine Symposia and Colloquia to be published, and it is the first dedicated to the Byzantine economy. The volume contains an introduction and seventeen individual chapters by an array of well-known scholars of antiquity and the medieval period. The book is divided into four sections that are both broadly chronological and thematic.
Morrisson’s introduction sets out the aims of both the earlier symposium and the volume. It highlights the importance of trade as well as the areas of study in the Byzantine economy neglected by both archaeologists and historians. The symposium aims to combat this. The reasons behind the emphasis on trade and markets here as opposed to the Byzantine economy itself are made clear, as is the existence of a general consensus among the participants concerning the criteria for local, regional, and interregional exchanges as well as the regulation, control, and payments within market exchange. These themes govern the chapters.
The first section—Late Antiquity and the Early Middle Ages—begins with a contribution by Jean-Michel Carrié. He provides an overview of the current debate and an updated view of the late antique economy. He also examines the criteria necessary for a market economy, the movement of currency and information (15-16) and innovations in technology and management (17-19). While highlighting the significant level of monetization of the economy in the fourth century CE (22-23), Carrié also considers the functions of urban and rural environs, the networks of exchanges that existed therein, and their relationship in a market economy.

Dominique Pieri offers a survey of the manufacture, use, and circulation of amphorae in the eastern Mediterranean. He discusses the evolution of amphorae in the late Antique and Byzantine period and examines comparative data from the western Mediterranean, as well as issues concerning standardization, production, imitations and forgeries. Perhaps most interestingly, he considers the apparent decline of maritime trade during the Late Roman Empire and the early Middle Ages, and offers a brief examination of the agents involved (39-42). Pieri leaves the reader under no illusion about the limited contribution that amphorae can make to economic history, but he also suggests that the study of amphorae allows us to follow the stages of economic development and regression, noting where the emphasis of future research should lie (48-49).
Michael McCormick first examines the meaning of the term “market” in a variety of ways. He considers theory and its application to the Roman and post-Roman world before moving to economic behaviour, models, and crucially the transfer and use of information. He offers a clear and engaging study of the use of containers (specifically amphorae and barrels), their place in economic history, and the implications of specific types of containers for both markets and transport systems; this section also contains some interesting issues concerning the efficiency of containers, their sizes, and their use in export (60-77). Finally, McCormick considers the movement of goods using the evidence of, and from, shipwrecks, and concludes that market conditions can be seen between c. AD 350-1000, albeit in part indirectly, and markets and the informational networks therein “mattered throughout the first millennium” (97).
John F. Haldon discusses commerce and exchange in the seventh and eighth centuries. Beginning with a brief discussion of “demand”, he moves on to consider the ceramic, numismatic, sigillographic, and textual evidence, while making suggestions for material evidence (in this case Byzantine belt buckles) that should be studied further to illustrate the “movement across and within imperial territory” (118). A discussion of roads and transport follows, with examples from the Balkans and Asia Minor. Haldon notes that there was a high degree of localized differentiation, that patterns altered over relatively short cycles, and finally that subsistence or marginal economies typically exist at “key tipping points” (122); they have the ability, on one hand, to flourish in a wider economic network, but on the other, to revert to “localized and semi-autarkic” relationships when these tipping points are forced and their balance is disturbed (122).
Continue reading the whole review
Byzantine economy byzantine empire byzantine history markets trade