Viewing the Morea: Land and People in the Late Medieval Peloponnese 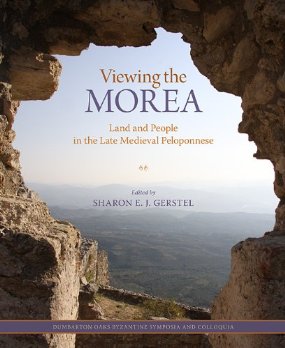 A new book in the series of Dumbarton Oaks Byzantine Symposia and Colloquia
The fourteen essays in Viewing the Morea focus on the late medieval Morea (Peloponnese), beginning with the bold attempt of Western knights to establish a kingdom on foreign soil. Reinserted into this tale of Crusader foundation are the large numbers of Orthodox villagers who shared the region and created their own narrative of an eternal and sacred empire generated by the pains of loss and the hopes of refoundation. Layered upon the historical and physical topography of the region are the traces of the Venetians, whose “right eye,” Modon, was located at the peninsula’s southwestern tip. How these groups interacted and how they asserted identity is at the center of inquiry in these essays. Also at the core of this study is the understanding of place and memory—the recollection of the ancient history of the Peloponnese, the architectural and cartographic marking of its mountains and valleys, the re-creation of distant capitals on its land, and the refashioning of the Morea for a Renaissance audience. The authors look at the Morea and its people in the broadest possible manner and with careful attention to written and material evidence, historiography, economic networks, and the making—or retelling—of myths.

About the Author
Sharon E. J. Gerstel is Professor of Byzantine Art and Archaeology at the University of California, Los Angeles.

Demetrios Athanasoulis is director of the 25th Ephoreia of Byzantine Antiquities.

Julian Baker is curator of medieval and modern coins at the Ashmolean Museum, Oxford University.

Veronica della Dora is Senior Lecturer in Geographies of Knowledge at the School of Geographical Sciences, University of Bristol.

Sandra J. Garvie-Lok is Associate Professor in the Department of Anthropology at the University of Alberta.

John Haines is Professor of Music and Medieval Studies at the University of Toronto, where he currently holds a Canada Research Chair.

David Jacoby is Emeritus Professor of History, Department of History, The Hebrew University of Jerusalem, Israel.

Elizabeth Jeffreys is Emerita Bywater and Sotheby Professor of Byzantine and Modern Greek Language and Literature at the University of Oxford, and Emerita Fellow of Exeter College, Oxford.

Florin Leonte is a doctoral candidate at the Central European University, Budapest.

Amy Papalexandrou is an independent scholar and research associate at the University of Texas at Austin.

Titos Papamastorakis was Associate Professor of Byzantine Archaeology and Art in the Department of History and Archaeology of the University of Athens.

Helen Saradi is Professor of Byzantine History and Byzantine Civilization at the University of the Peloponnese.

Alan Stahl is Curator of Numismatics and Lecturer in the Departments of Classics and History at Princeton University.