The Throne of Archbishop Maximianus of Ravenna 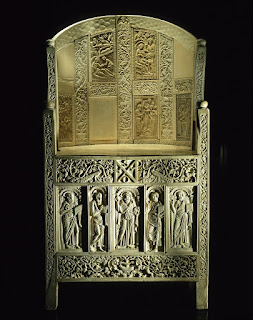 The Throne of Maximian (or Maximianus) is a throne that was made for Archbishop Maximianus of Ravenna and is now on display at the Archiepiscopal Museum, Ravenna. It is generally agreed that the throne was carved in the Greek East of the Byzantine Empire and shipped to Ravenna, but there has long been scholarly debate over whether it was made in Constantinople or Alexandria.


The style of the throne is a mixture of Early Christian art and that of the First Golden Age of Byzantine art. It is made of carved ivory panels, with frames of winding vines and grapevines, on a wooden frame. The throne itself is large with a high semi-circular back and may have held a jewelled cross or Gospel book for some of the time. The ivory carvings are done in relief and the panels depict important biblical figures. The back of the throne shows scenes of the Life of Christ, the sides include scenes of the Story of Joseph from the Book of Genesis, and on the front of the throne are the Four evangelists around John the Baptist, who is holding a medallion with the Lamb of God and Maximian’s name above him.