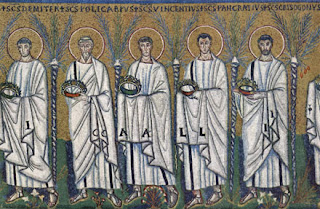 From the editors (Niels Gaul and Averil Cameron):


Dialogues and Debates from Late Antiquity to Late Byzantium offers the first overall discussion of the literary and philosophical dialogue tradition in Greek from imperial Rome to the end of the Byzantine empire and beyond. Sixteen case studies combine theoretical approaches with in-depth analysis and include comparisons with the neighbouring Syriac, Georgian, Armenian and Latin traditions. Following an introduction and a discussion of Plutarch as a writer of dialogues, other chapters consider the Erostrophus, a philosophical dialogue in Syriac, John Chrysostom’s On Priesthood, issues of literariness and complexity in the Greek Adversus Iudaeos dialogues, the Trophies of Damascus, Maximus Confessor’s Liber Asceticus and the middle Byzantine apocryphal revelation dialogues. The volume demonstrates a new frequency in middle and late Byzantium of rhetorical, theological and literary dialogues, concomitant with the increasing rhetoricisation of Byzantine literature, and argues for a move towards new and exciting experiments. Individual chapters examine the Platonising and anti-Latin dialogues written in the context of Anselm of Havelberg’s visits to Constantinople, the theological dialogue by Soterichos Panteugenos, the dialogues of Niketas ‘of Maroneia’ and the literary dialogues by Theodore Prodromos, all from the twelfth century. The final chapters explore dialogues from the empire’s Georgian periphery and discuss late Byzantine philosophical, satirical and verse dialogues by Nikephoros Gregoras, Manuel II Palaiologos and George Scholarios, with special attention to issues of form, dramatisation and performance.