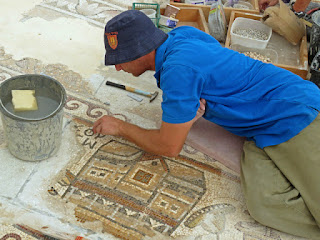 
The mosaic floor of a Byzantine-era church that had been removed for conservation purposes has been returned to Qiryat Gat Industrial Park, where it will be on display. The 1,500-year-old mosaic realistically depicts a Nile River landscape and the streets and buildings of a settlement in Egypt where, according to Christian tradition, the prophet Habakkuk had been buried. “The appearance of buildings on mosaic floors is a rare phenomenon in Israel. The buildings are arranged along a main colonnaded street of a city, in a sort of ancient map,” archaeologists Sa’ar Ganor and Rina Avner of the Israel Antiquities Authority said. Read more