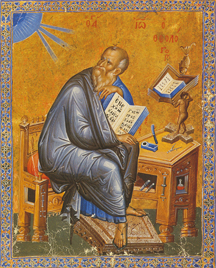 
This study focuses on the Eucharistic theology of the Byzantine theologian Nicholas Cabasilas (d. c. 1390). It examines the presence of the divine and its transmission in the Divine Liturgy. The results of the study indicate that, according to Cabasilas, man is able to partake in God in the liturgy, and thus to subjectively receive and participate in his presence to the world. In Cabasilas’ thought the presence of God is manifested in the liturgy on two major levels. There is, firstly, the level of divine presence which permeates the entire liturgy. It is based on the omnipresence of God, which is pre-eminently manifested in the incarnation of Jesus Christ. Great events of the divine economy are to be contemplated and participated in throughout the Eucharistic liturgy in the outward forms and symbols of the rite. Secondly, the presence of God is given a concrete manifestation in the presence of Christ in the Eucharistic elements, caused by the action of the Triune God, especially due to the Holy Spirit’s descent on the bread and wine during the epiclesis and Christ’s consecratory priestly power. What is ecumenically significant is Cabasilas’ conclusion that the Greek and the Latin doctrines on the conversion of the Eucharistic elements are identical. He claims that in the Latin Mass there is also a strong epicletic element, proven by the part of the Roman Canon known by its incipit, Supplices te rogamus. According to Cabasilas, divine presence should ultimately become a reality within man, e.g. in his heart, soul and body. Deep subjective human reception of God’s presence to the world takes place through receiving the body and blood of Christ. Cabasilas avoids accurate definitions in his statements of Eucharistic communion (koinonia) and union (henosis) with God. Speaking in accordance with the mystical tradition he emphasises the transforming effect of the Eucharist on man. In the end, union with God is manifested as life in Christ, perfected in Christian love towards neighbours.